How to know if my dog has pyometra

One of the most serious and common diseases in older dogs is canine pyometra. It is very important to treat this disease in time as it develops very quickly and is usually fatal if left untreated. To catch it early it is essential to understand what the disease consists of and know the symptoms which pyometra can produce in a bitch. If you notice that your dog is more listless than usual or is urinating more than usual the dog could be ill and you should take it immediately to the vet. To know how to tell if your dog has pyometra, in this OneHowTo article we give you the basics so you can rapidly identify it.

You may also be interested in: How to Know if my Dog Has Leishmaniasis
Contents

What is Canine pyometra?

Canine pyometra is a bacterial disease that affects the female reproductive tract, specifically the uterus, which is why it only occurs in female dogs. This disease is a severe infection of the uterus caused by bacterial intrusion and colonization. Such infection ends with the production of a large quantity of pus. Infection of the uterus can result in open cervix or closed cervix pyometra. In the first case the pus will be expelled through the vagina whilst in the second, due to it being closed, the secretion of pus in the uterus will be unable to leave.

Pyometra can also occur in cats, but it is less usual. It usually appears in female dogs over 6 years of age, although there is also a small percentage of cases of young female canine pyometra. It is very important to know the possible diseases of female dogs so to detect them as soon as possible.

How does pyometra occur in female dogs?

Canine pyometra usually appears in the diestrus phase of the dog's heat cycle. What is the diestrus? The diestrus stage is the cycle phase that occurs just after being in heat. Having clarified this point, how does pyometra occur? When the dog is in the estrus period the cervix opens and bacteria can easily enter through the vagina. Once the estrus heat phase has been completed the diestrus phase starts and this is where the cervix closes, leaving the bacteria inside. Recall that the heat cycle produces a lot of progesterone in female dogs and, once completed, can cause some changes in its anatomical structure, such as hormonal imbalances. These changes make the uterus of the female dog the perfect habitat for bacterial growth. Since colonization takes time, canine pyometra usually shows its first signs past two months of its initiation (after the last heat cycle).

Hormonal changes often occur in dogs who have taken some form of contraception, either oral or intravenous, in elderly females with irregular heat cycles or those suffering closely spaced phantom pregnancies. These kind of bitches are the ones most likely to contract the disease.

Once your dog has contracted the disease of canine pyometra it will begin to present a series of symptoms which you need to detect so to take it quickly to the vet. The symptoms of this disease are usually:

If your dog suffers any of these symptoms, do not hesitate to take her to the vet for a full check-up; if the canine pyometra is not treated in time it can be a fatal disease. In open cervix pyometra the dog will keep licking the area of the vagina due to the secretion of pus. In closed cervix cases the other symptoms are more common, as the inability to expel the pus significantly increases the discomfort of the dog.

In severe cases, pyometra may develop other diseases in dogs, such as renal insufficiency.

If you want to read similar articles to How to know if my dog has pyometra, we recommend you visit our Pets category.

How to know if my dog has ringworm
How to Know if My Dog Has Parvovirus
How can I know if my dog has parasites
How to Know if my Dog Has a Flea Allergy
Most read
1.
Why Is my Dog not Eating after Giving Birth?
2.
Home Remedies For My Dog's Cough
3.
What Are The Symptoms Of A Female Dog In Heat
4.
How to Know if your Pit Bull Is Purebred - Foolproof Traits
5.
How To Check A Dog's Fever
6.
What to Feed a Dog with an Upset Stomach
7.
How to Raise my Dog's Low Platelet Count
8.
What To Do If Your Dog Doesn't Chew Its Food

How to know if my dog has pyometra 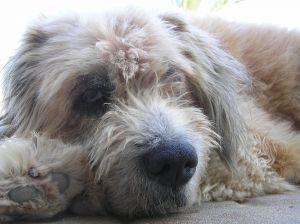 How to know if my dog has pyometra
Back to top