How Does a Cat Bib Work

If your cat goes outdoors often and catches birds, then you may have heard of the Cat Bib, which is an alternative to bells which you can now purchase online and in many countries.

With controversy on whether cats should wear bells on their collars or not, many owners who are worried about the Wildlife in their surrounding area want to find other methods to refrain cats from catching birds. Though it may seem like a solution, at OneHowTo we'd like to show you how a cat bib works, so you can make a decision on whether this method is the best for your cat's hunting habit.

You may also be interested in: Why Does My Cat Vomit
Contents

How does a cat bib work?

A cat bib is a neoprene triangular piece of material in a bright color that attaches to an elastic collar with some hoops and Velcro. This item is basically used for outdoor cats who hunt for prey. There are several studies that warn about the impact that feral cats have on local birds, decreasing its population so, in this sense, this invention is an alternative to a bell to protect native species.

The cat bib works by having a bright color that will warn possible prey of the presence of a cat. The shape of this gadget will also prevent the cat from landing on two feet when they pounce on their pray, reducing the possibilities of a bird being killed.

Its inventors claim it does not interfere with their daily activity, which is why a cat owner can choose to only put it on when the cat goes outdoors or leave it on 24/7.

Pros of a cat bib

As you may know, there are certain reasons why you shouldn't put a bell on your cat, this is why we should analyze the pros of this alternative.

The cat bib will not distress your cat or have any psychological effect on in as the bell does. In fact, according to Murdoch University (Perth, Australia) more than 80% adapt to it immediately, though some can take up to a week to adapt. People who have used it also claim their pet can climb, run and clean themselves properly.

The effectiveness of this product is higher that the bell, due to the fact that cats can learn to keep their head still so the bell doesn't ring, but the color of this bib will warn prey at a distance of the presence of the cat.

Though many argue that they could get stuck with it and choke, the attachment is made with Velcro so the cat does't choke if the bib gets stuck.

Cons of a cat bib

However, it's important to mention that there are many arguments against the cat bib.

For example, it may disturb cats during the first days, making them run around like crazy trying to get the bib off by any means. They may also trip on it if the cat is wearing a bib that is too big for it.

Another con of the cat bib is that the effectiveness of the product on mammals and insects is significantly reduced, between 40% and 20%.

We should also mention that, though there are no official studies to prove it is bad, it is not recommended by the SPCA.

Should my cat use a cat bib?

At this stage, there are no studies on the most effective method or the most secure, so the decision is entirely up to you, as you are the person who knows your cat best, so you can figure out how your cat will react to the bib.

Another alternative to avoid cats hunting birds is neutering, as this will reduce your cat's hunting instincts. However, the RSPB says there is no direct correlation between decline of bird population and feral cats[1]. Evidence up to this point suggests factors such as habitat loss to be more important factors.

All in all, choosing to get your cat a bib or any other preventive measure will depend on your relationship with nature and how you feel about domesticating your cat and suppressing its natural instincts.

If you want to read similar articles to How Does a Cat Bib Work, we recommend you visit our Pets category.

Why You Should Not Put A Bell On Your Cat
Why does my Cat Hide?
How Does Eating Grass Help Cats
Why Does My Cat Wag Its Tail
Most read
1.
Home Remedies For My Dog's Cough
2.
Why Is my Dog not Eating after Giving Birth?
3.
What Are The Symptoms Of A Female Dog In Heat
4.
How to Know if your Pit Bull Is Purebred - Foolproof Traits
5.
What to Feed a Dog with an Upset Stomach
6.
What Are The Symptoms Of Colds In Dogs
7.
What To Do If Your Dog Doesn't Chew Its Food
8.
How To Tell If A Cat Is Male Or Female

3 comments
Pinto bean
01/09/2019
Why not just put on a very very bright neon collar? Some birds maybe not see all the colors we see or in more of ultra violet but put rainbow of colors also putting g in a rainbow colors of the ultra violet to go along side with the other colors? Also it seems cruel not to let them hunt its their nature they are suppose to do that suppose to be their nature if you stop that they might lash out and stressed out because they could not release that built of energy, stress, drive, urge to be what their nature is compelling to do. Lash out in your home like pooping on everything especially in your bed or just shredding up your couch. But maybe if you played with them with some kind of string lazer light that might also work where they get tired and bored and then when time to go out they are like nah I'm burned out on chasing stuff time for my next stage in my life and that is sleeping and being lazy for just about 20 hrs a day the the other four eating grooming being loved on and pet by their human! We don't own a cat the cat owns the human bc we practically will obey the cat and be their at their beckon call when the meow we say yes master right away they totally own their human! Lol
Rating:
Kathy
08/06/2018
The whole article was negated by the ridiculous statement from the RSBP saying that there is no correlation between cats and bird decline. Are they out of their Vulcan minds? Denial and bad science - typical pro feral cat propaganda.

The statement from the RSPB is the official statement concerning wildlife in the UK which points to the range of issues which affect decreasing bird population in this region.

We do not spread propaganda. We look to the facts from research and report them as best we can. Does this mean new research won't come along and amend or bring to light new perspectives? Of course not. It does mean we require studies and concrete evidence to make bold claims. The claim by the RSPB is not definitive, but simply points to the current evidence that habitat loss is a much more significant factor in bird population decrease.

There are those who disagree and we are happy to consider alternative explanations. However, until new evidence and research is brought to light, these explanations are suppositions only.

We have amended the article to include the official statement for your reference.
Rating:
dave
09/10/2017
This is one of the stupidest things I have ever seen. I thought this was a joke at first... but I think they are serious. Think of how YOU would feel with a giant piece of plastic strapped around your neck all day... sigh. From neck to stomach, walking around with this thing on... would make me want to kill myself if I were the cat. I think this website must make and sell this thing... long to go down as another invention in the scrapheap. And good riddance.

we are just informing subjectively about this option and we do not sell this product. We are giving you insight on this alternative and give an objective and journalistic point of view, we are not saying it is the best option.

Best wishes
How Does a Cat Bib Work 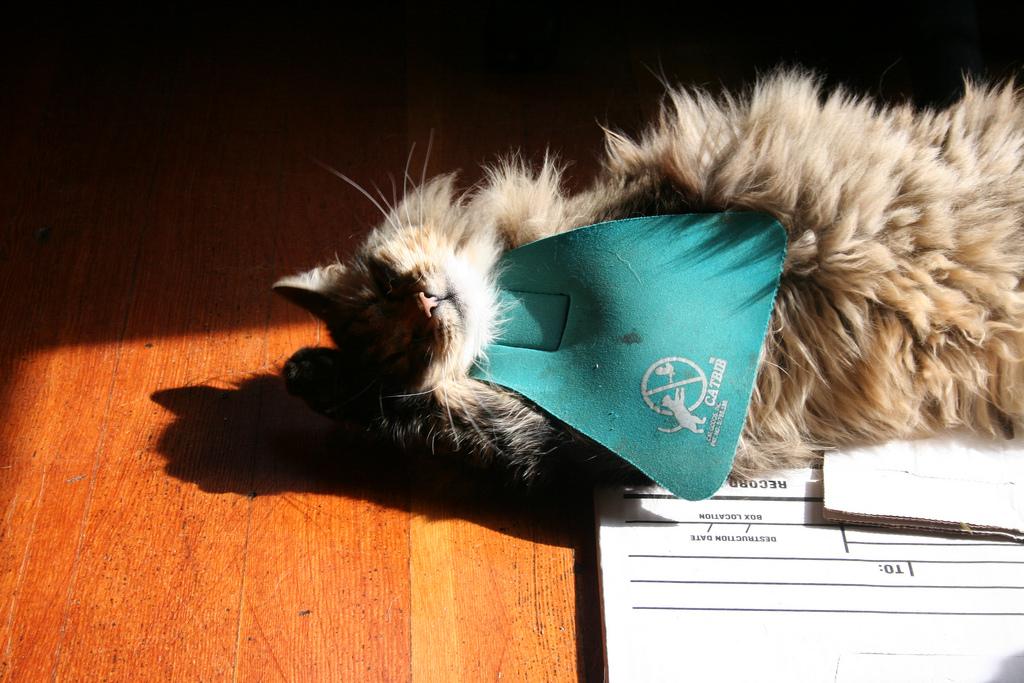 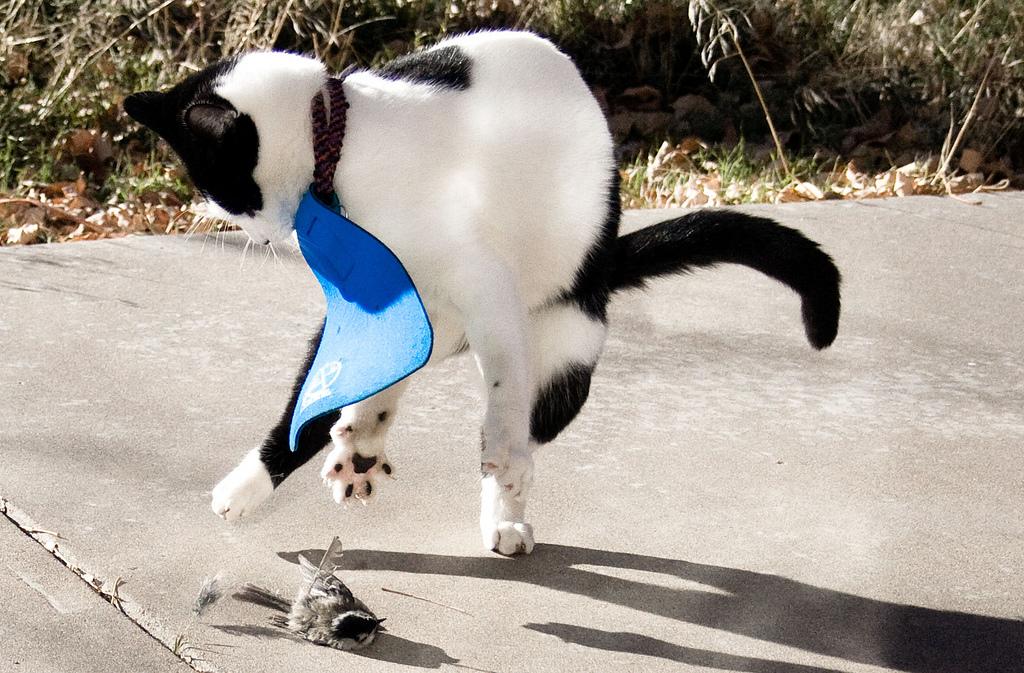 Image: flickr.com
1 of 2
How Does a Cat Bib Work
Back to top